The Shining (1980)
Click a showtime for more information / All showtimes are approximate. 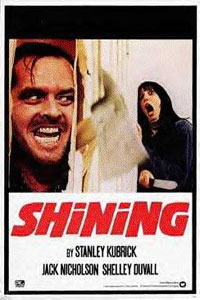 All work and no play makes the caretaker of an isolated resort go way off the deep end, terrorizing his young son and wife. Jack Torrance has come to the elegant, isolated Overlook Hotel as off-season caretaker. Torrance has never been there before - or has he? The answer lies in a ghostly time warp of madness and murder.