Trick 'r Treat
Click a showtime for more information / All showtimes are approximate. 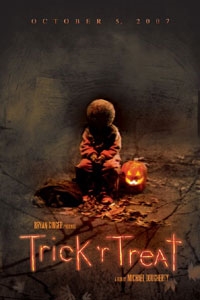 It is said that Halloween is the night when the dead rise to walk among us and other unspeakable things roam free. The rituals of All Hallows Eve were devised to protect us from their evil mischief, and one small town is about to be taught a terrifying lesson that some traditions are best not forgotten. Nothing is what it seems when a suburban couple learns the dangers of blowing out a Jack-o-Lantern before midnight; four women cross paths with a costumed stalker at a local festival; a group of pranksters goes too far and discovers the horrifying truth buried in a local legend; and a cantankerous old hermit is visited by a strange trick-or-treater with a few bones to pick. Costumes and candy, ghouls and goblins, monsters and mayhem... the tricks and treats of Halloween turn deadly as strange creatures of every variety--human and otherwise--try to survive the scariest night of the year.